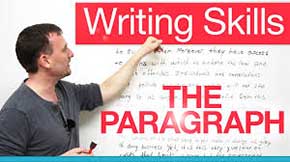 The other day I was editing an article that had originally appeared in The Atlantic Monthly, adapting it for use in the newspaper. Cullen Murphy, the author of the piece to which we’d bought reprint rights, is a gifted, graceful writer, so in this case “editing” mostly meant deciding what portions of the 7,000-word original to use and what, painfully, to cut.

Besides the delete key, the other spot on the keyboard I found myself using over and over again was the return – to create new paragraphs. In the pages of The Atlantic, the long, uninterrupted blocks of words had looked just fine. On my computer screen at work, however, where I’m used to viewing the choppy, often one-sentence-per-paragraph stories that move on newspaper wire services, the unbroken stream of sentences looked impenetrable. Return, return, return – relentlessly I chopped up the screen-filling paragraphs into more reader-friendly tidbits.

But this hands-on demonstration of the sometimes-arbitrary nature of paragraphing left me troubled. Shouldn’t the paragraph be, as Strunk and White prescribed in The Elements of Style, “the unit of composition”? And what about my elementary-school teachers‘ lessons about paragraphs built from topic sentences, with each sentence thereafter serving to support the topic? “Topic sentences be damned!” I might as well have shouted as I ruthlessly injected returns. If The Atlantic original had been constructed around any parade of topic sentences, they were nowhere to be found by the time I and my blazing return key were through.

Still more troubling was this: The paragraph-injected version read just fine. It looked just fine on the page; if anything, the paragraphs still seemed a tad long by newspaper standards. I had rejected everything I’d learned about paragraphs in grade school, and yet somehow the English language had survived, its ability to communicate coherent thought intact.

Was everything I thought I knew about paragraphs wrong?

As that last paragraph – a lone sentence, set off for dramatic effect in a paragraph by itself – demonstrates, the art of the paragraph in nonfiction is indeed a flexible thing, far removed from the strict lessons of grammar school. But that doesn’t mean you should throw out the baby with the bathwater. However liberated from rules and conventions, no matter how changeable depending on the destined medium, the paragraph remains a useful tool both for writers and their readers.

For writers, though you need not be bound by topic sentences and such, the paragraph can indeed be a useful unit of composition. Thinking about your work in the convenient “chunks” of paragraphs makes for more manageable organizing. The paragraph is simply practical: Most articles require too many individual sentences to keep them all straight in your head as you’re trying to decide which comes where; as the next bigger unit – the molecule to the sentence’s atom – the paragraph makes an ideal building block out of which to assemble whole articles.

For readers, the paragraph offers a welcome spot to catch their breath. It breaks up the grayness of a page and makes a long column of type seem less intimidating.

Of course, this is the source of the sometimes-dramatic difference in paragraphing between newspapers and magazines or books, brought home to me by that Atlantic piece. A newspaper, built for rapid scanning, must present a bitesized look to the wary reader; magazines, particularly those aimed at a more settled-in-the-easy-chair audience, such as The Atlantic and The New Yorker, can get away with bigger blocks of type. Newspapers, too, generally have narrower columns, making those Atlantic-esque paragraphs stretch far down the page like gray skyscrapers. The result is what William Safire calls “hyperparagraphication” in newspaper prose: “like feeding a baby tiny spoonfuls of mashed banana, building an appetite between insertions of the spoon in the ready-to-squall mouth.”

How can you strike a balance between building your story out of well-constructed paragraphs and keeping your readers from squalfing? In the absence of the old rules, it helps to keep in mind several more modern principles that make for successful paragraphing. (These suggestions are mine; if your grandchildren read them 100 years from now, set down in a schoolbook as strict rules, please forgive me.)

First and most sweeping is what we might dub the Modified Grammar-School Approach. That is, while your paragraphs need not be constructed in a strict topic-support-support hierarchy, it’s still useful to think of each paragraph as making a point – just one point. When you’ve made it, pound that return key and move on.

In moving from the outline of your article (you are outlining, aren’t you?) to a first draft, for example, you might think of each point in your outline as representing one paragraph in your draft. Each point might have one to three, perhaps as many as five, connected facts or examples in your notes.

If you’re writing a travel article about Seattle, for instance, you might have a spot in your overall organizational scheme where you want to mention Seattle’s proximity to the Washington state wine industry. The paragraph groming out of this point might be built like this:

Seattle as a place to sample Washington state wine industry

Each specific winery might consume a sentence or two, with a few facts about its setting, tastings and tours. The whole paragraph, with set-up sentence and specifics, might take four or five sentences – a manageable glob on most pages and one readily consumed by even fickle readers.

By forming your paragraphs this way, each becomes a unit of thought that is more or less capable of standing on its own, and easily manipulated as you write and rewrite. Consider our make-believe story on touring Seattle, where your paragraph on wineries might be woven into a discussion on things to see and do in the city’s outer reaches. Suppose you decided instead that Seattle’s winery connections would fit more smoothly into a larger section on the city as a meeca for gourmets? Pick up the paragraph and move it! On maybe you conclude that your article’s main focus ought to be on Seattle as a fun place for families, and wineries don’t really fit after all. Select that paragraph and use the delete key.

Paragraphs that follow the Modified Grammar-School Approach work like a child’s Lego building blocks. Even before they are completely written, you can easily try them out in other locations, test their fit with other paragraphs, and move them to make new connections. They are also handy unfits for combining into larger, more complex structures – without having to worry whether each component will hold up under the stress of composing the whole.

The Modified Grammar-School Approach will keep you clear of the extremes of hyperparagraphication – those stories made up of single-sentence paragraphs that stream across the page like machine-gun fire. (In such a story, for example, the sentence about Seattle and wineries, plus the citation of each individual winery, would each be a separate paragraph. That’s a good way to wear out your return key, not to mention the reader.)

But once you start gathering elements together to form paragraphs, it’s easy to tilt to the opposite extreme: Like a snowball rolling downwil, your paragraphs keep accreting until the reader gets buried in an avalanche of unbroken sentences. The cure for such megaparagraphs comes from recognizing the natural pauses and logical breaks in your prose – the kind of return-insertion points I hunted for in that Atlantic piece. These aren’t mandatory paragraphing spots, but your readers will thank you if, when in doubt, you hit the return key.

Start with an extension of the grammar-school strategy – think of it as the Enumeration Break. Whenever you have a subsidiary point to make that will take more than a sentence or two to explain or illustrate, make it a new paragraph. Whenever you have a list (four things to remember about proper paragraphing, six must-see attractions in downtown Seattle), consider whether each element in the list will occupy more than one sentence. If so, make each element its own paragraph,

You can envision the Enumeration Break as resulting in paragraphs like this:

And so on – though it’s not necessary to actually number your points.

A related invitation to Wt the return key is the Elaboration Detour. Think of it as akin to the Enumeration Break but with only one subpoint. Essentially, you are detouring from the main march of your argument to elaborate for the length of a paragraph on one aspect of the previous paragraph. Take, for example, the relationship of the two paragraphs above: one introducing the concept of the Enumeration Break, the other presenting a helpful way to think about it.

You might use this Elaboration Detour to separate a general paragraph (Seattle has many attractions for the gourmet) from a specific illustration of an element of that paragraph (for example, wineries). By setting off the example in its own paragraph, you give the reader a break and signal your small directional shift.

Detours that take the reader in an opposite direction, of course, demand a new paragraph. This is the On-the-Other-Hand Switcheroo. Here the brief breather of a new paragraph prepares the reader for an idea in contrast to what has gone before.

The On-the-Other-Hand Switcheroo works with opposing viewpoints, balancing opinions and cautionary notes. Need to inject a bit of not-so-fast-folks? Seeking to interweave two or more differing perspectives on an issue? Presenting the pros and cons? A paragraph Switcheroo warns the reader of your bend in the road.

To use the On-the-Other-Hand Switcheroo, look for signs of contrasting thoughts such as:

But the breaks in your story don’t have to be as dramatic as divergent opinions. (Note the Switcheroo there that practically begged for a new paragraph?) You should keep your authorial ear tuned for any sort of interruption in the action that can serve as a basic paragraph-able pause.

Quotations are the most obvious example of a shift that calls for a new paragraph: With each new speaker, or alternation in speaker, hit the return key. Just as your speakers catch their breath between speeches, so, too, should you let your readers rest with the tiny space of a fresh paragraph.

Other opportunities for paragraphable pauses abound, however. Switches of your authorial camera between persons, even if they’re not speaking, let you switch paragraphs as well. In an article with a chronological aspect, you might seize on a shift in time to start a new paragraph: the next day, an hour later, at 8 p. m., and so on. Even minor changes of place call for a change of paragraph: farther down the street, across the highway, etc.

The Pause That Empowers

You can take advantage of the small pause, the break in rhythm, created by a fresh paragraph to emphasize the text that follows – even when the reader might not be expecting a break. This Emphatic Paragraphing works like the print equivalent of a dramatic pause in speaking: Whatever comes after gains weight and import from the artificial break. It is set apart, put in the spotlight.

Typically, Emphatic Paragraphing is used to set off paragraphs of only a sentence or two. The power of a suddenly new paragraph quickly dissipates over the span of several sentences. A short burst of a paragraph, on the other hand, gains potency not only from its indentation but also from the visual variety on the page.

The Emphatic Paragraph can be a single dramatic statement, a quote, even a question such as:

Was everything I thought I knew about paragraphs wrong?

The answer to that question, as you can see, is: Not exactly. The basic principles of one-topic-per-paragraph and unit-of-composition still apply; contemporary nonfiction writing has just bent the rules to keep the interest of impatient readers and to add bounce and variety to prose.