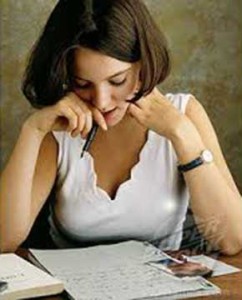 I started writing stories about people in trailer parks without realizing I was participating in a genre. “Did you grow up in a trailer park yourself?” people have asked me, and the truth is no, I grew up in a small town in Southwest Missouri. My father was a doctor, and though we didn’t have a huge or fancy house, our basement alone, if you included the laundry room, could have accommodated a couple of double-wides.

I worked up to trailer parks; what interested me first were rows of identical small frame houses in Hammond and East Chicago. We saw these houses from the South Shore train we took into Chicago, or from the expressway, driving past them. I especially liked passing them at night, when you could see the drawn curtains with the lights shining behind them, or, if you got lucky, the open curtains and a glimpse of the life going on inside. I don’t like grandiose statements about writing, or writers, or how you become one, but I’ll make one anyway, because it was true for me: Those lighted windows were the reason I became a writer. If I couldn’t live behind them, I could at least invent lives for the people who did.

What I wanted to invent, really – and this is in weird contrast to my actual stories – was happiness. I thought happiness was synonymous with less of everything. Those small houses huddled together on their little lots were to me like litters of spaniels, whereas the large, big-yarded houses in my neighborhood were like unsociable dobermans. The difference for me was the presence or absence of love; when I looked at those lighted windows, I imagined that the lives behind them had a kind of substance that my own life didn’t seem to have. It was as if mine were made of air and theirs were made of water. I believed in a kind of reverse fairy tale: The prince would be happier leaving that stuffy castle and moving in with Snow White and those fun dwarves.

Becoming interested in trailer parks was, for me, just the next logical reverse step. If people were happier in small houses, wouldn’t they be ecstatic in mobile homes? And they could escape: If a place didn’t work out, they could hitch up their houses and leave for someplace better.

Even after I was old enough to know that it wasn’t fun to be poor, I still looked at trailer parks with envy. I thought, Things are going on there that aren’t happening in my neighborhood. Or, more accurately, if you lived in a trailer park you’d know more of what was happening: The walls were thin, the trailers were close together. The luxury of privacy begets secrecy, it seems to me, and there’s nothing lonelier than a secret. It’s the enemy of love. Why else is our first instinct,when we fall in love, to tell someone? I imagined – and still do – that in a trailer park you become resigned to everyone knowing your business, and as a result, you don’t bother hiding much. You could shout at a loved one, “Don’t be such an asshole,” because (beyond the obvious reason) you had heard a neighbor shout that same thing and it hadn’t made the world fall apart. In fact, you might realize it had given you a chuckle. And if things really got out of hand, the neighbors would know that, too, and possibly intervene. The fiction writer in me liked the idea of such lively dialogue and interaction. The lonely child in me simply liked the notion that someone – just once – could be straight forward, authentic, even pissed off.

Real trailer park life is not so ideal, of course. It’s one thing to drive past, or through, or even visit for a week, but it’s a different thing to live in a cramped space on not much money, sometimes next to neighbors whose secrets you’d be better off not knowing. But what we’re drawn to, especially as children, is hardly ever the reality of the thing itself. We’re drawn to the magic we invest in whatever we perceive to be missing from our lives. There’s a truth to that magic, at least for the writer – it’s the subjective, idiosyncratic truth that gives us a voice. In that sense, it’s more crucial than the thing itself, because if we’re going to write about life without using an original voice, we may as well

2 thoughts on “Writing For Yourself Is The Best”